an ordinary man, an extraordinary journey 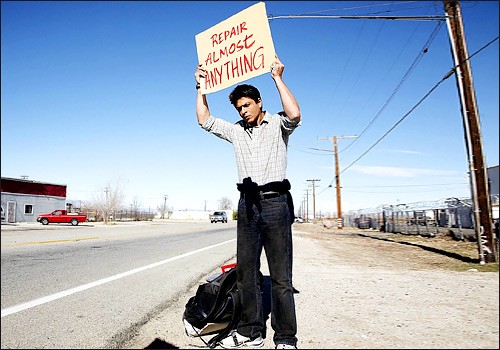 I tell u one more time about a movie, that I know I’m so late to tell u. but, I like to do it. I know why I should cry because the simple things. at least, it has been said by one of my friends. usually, i will tell about a movie that is not just a movie. like “My Name is Khan”.

yes, I know you’ve ever watched it. the movie told about Rizwan Khan (Tanay Chheda) is a Muslim child who grew up with his brother Zakir and his mother (Zarina Wahab) in a middle class family in the Borivali section of Mumbai. Rizwan is different from the other children and no one, including his mother, can understand why. However, he has certain gifts, particularly a special ability to repair any machine that is broken. His difference leads to special tutoring from a reclusive scholar and extra attention from his mother. This attention, however, leads to a heightened level of jealousy from his brother Zakir, who eventually leaves his family for a life in the United States.

Despite this resentment, as an adult Zakir (Jimmy Shergill) sponsors Rizwan (Shahrukh Khan) to come and live with him in San Francisco. It is at this time that Zakir’s psychologist wife, Haseena (Sonya Jehan) diagnoses Rizwan as having Asperger’s syndrome, a disorder which makes it difficult for people to interact socially. Rizwan also begins to work for Zakir as an herbal salesman and in the process he meets a Hindu woman, Mandira and her young son, Sameer or Sam (Yuvaan Makaar), from a previous marriage. Despite Zakir’s hostility to the match, they marry and settle down in the fictional town of Banville, where both Mandira and Samir take Rizwan’s last name as their own. They also live next door to the Garrick family. Sam is close with their young son, Reese (Kenton Duty and Michael Arnold) while Mark (Dominic Renda) is a journalist and Sarah (Katie A. Keane) is a friend of Mandira.

The Khans’ perfect existence gets disrupted, however, after the September 11 attacks on the twin towers in New York City. Mark goes to cover the war in Afghanistan and dies there. At the same time, the Khan family begins to experience post 9-11 prejudice in their community and Reese begins to turn against Sam as well. One afternoon, an argument between them turns into a racially motivated schoolyard fight between Sam and a number of older students. Reese tries to stop the fight but is held back and Sam is injured so badly that he dies. A shattered Mandira blames Rizvan for his death stating that Sam “died only because his name was Khan.” She then tells Rizwan that she no longer wants him in her life. When he asks her what he has to do to be a part of her life, she tells him that he has to tell the people of the United States, and the President that his name is Khan and that he is not a terrorist.

Rizvan thus sets out on a journey that takes him from one US state to another (including Georgia, where he is befriended by Mama Jenny) in order to first meet President George W. Bush and later Barack Obama. During this quest, he is detained and later freed from the San Francisco Airport. Later, in Los Angeles, he prays in a Mosque and overhears violent rhetoric from Faisal Rahman (Arif Zakaria). He reports this to the FBI but there is no response at that moment. Later, while waiting in a crowd to meet President Bush and repeating again and again, “my name is Khan and I am not a terrorist,” Rizwan is arrested and placed in a prison by police who misinterpret his statement.

While in the prison he is tortured as a terrorist suspect and meets the psychiatrist Radha (Sheetal Menon) who believes he is innocent. He is later released after a media campaign by two Indian student reporters Raj (Arjun Mathur) and Komal (Sugandha Garg) and Bobby Ahuja (Parvin Dabas) prove his innocence by unearthing his attempts to inform the FBI about Faisal Rahman. After his release, he returns to hurricane-hit Georgia to help Mama Jenny and her son. His efforts attract media attention and numerous Muslims come to help as well. At the same time, Reese confesses to Mandira and reveals the identity of the boys who beat up Sam. She informs Detective Garcia (Benny Nieves) who has been assisting her on the case.

After they are brought to justice, she joins Rizwan in Georgia. At the moment she arrives, Rizwan is stabbed by a follower of Faisal Rahman and is rushed to the hospital. With Mandira’s help, he survives and meets President-elect Barack Obama (Christopher B. Duncan) who tells him: “Your name is Khan and you are not a terrorist.” (from wikipedia

13 thoughts on “an ordinary man, an extraordinary journey”